See the ISSF Observer Training Handbook for a detailed description and illustrations.

A purse seine is a large wall of netting deployed around an entire school of fish or a Fish Aggregating Device (FAD). The seine has floats along the top line with a lead line threaded through rings along the bottom. Once a school of fish is located (either by visual cues such as congregations of seabirds or dolphins, or through using sonar), a skiff encircles the school with the net. The lead line is then pulled in, "pursing" the net closed on the bottom, preventing fish from escaping by swimming downward. The catch is harvested by hauling the net (‘net rolling’) and stacking it on the back deck of the vessel until all slack is removed and the fish are crowded in the ‘bunt’ and a brailer (small net) can be used to scoop out the fish.

Purse seine fisheries can be broadly classed as associated or unassociated. For example, sets on free-swimming schools of tuna are ‘unassociated’ and generally have a very low bycatch rate. 'Associated' fisheries involve sets on floating objects that are either natural, such as logs or palm fronds, or man-made, such as Fish Aggregating Devices (FADs). FADs attract large numbers of fish species thus, when fishing on FADs, bycatch rates are higher. This is true for sharks, where bycatch rates are also increased through entanglement in FAD netting. Sea turtle bycatch in purse seines and entanglement in FADs is low. 'Eco' FAD designs (non-entangling and biodegradable) are being promoted to reduce shark and sea turtle entanglement and to reduce marine debris.

Purse seine sets are also associated with marine animals such as dolphins, whales and whale sharks. Dolphin mortality in seines in the eastern Pacific was a significant issue in the 1960s that was ameliorated with the advent of the ‘backdown procedure and Medina Panel’ and, more recently, regulations prohibiting setting on dolphin schools. The practice of setting on whale sharks is increasingly discouraged or prohibited by RFMOs through regulation, e.g., WCPFC Conservation and Management Measure for Sharks 2019-04 and IATTC Resolution C-19-06 on Resolution on the Conservation of Whale Sharks. 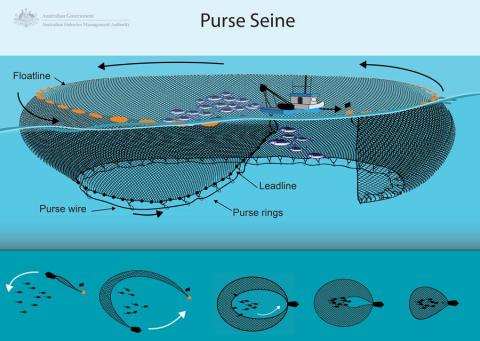