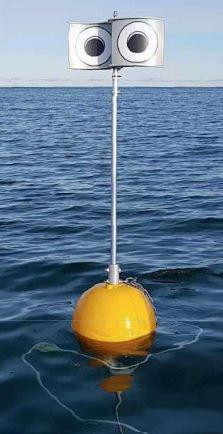 © Andre Kalamees
Sea Turtles
Shark decoys have been shown to work as sea turtle 'scarecrows', though these decoys also frightened-off target finfish species (tunas, billfish, mahi-mahi). However, there remains potential to develop decoys which maintain target species catch rates while deterring sea turtles from approaching baited longline hooks.
In tank trials, shark shapes triggered an innate flight response in captive-bred sea turtles that had not been exposed to sharks or other predators. In more recent at-sea trials, shark shapes reduced the number of turtles caught on nets.
Research is required to identify the shark characteristics most repulsive to sea turtles. It has been suggested that, for example, adding motion or sound may make the decoy appear more lifelike.
Exploiting the difference in visual systems between turtles and tunas (and other commercially important fish species such as billfish and mahi-mahi) may be a way to decrease turtle bycatch while maintaining target species catch. Turtles can see into the ultraviolet light (UV) spectrum while tunas etc can't. For example, by constructing decoys from transparent, UV-absorbent plastic, shark shapes may appear as black silhouettes and trigger avoidance behaviors in sea turtles while remaining transparent and undetected by target fish species.
Seabirds
Researchers have developed a floating buoy that displays large, obvious ‘looming eyes’ that can be seen from a long way off. As the buoy bobs in the water, the tall pole sways conspicuously, and the eyes rotate in the wind. The idea for this 'looming eyes buoy' (LEB) came from two visual stimuli that stimulate an avoidance response or trigger a collision risk signal in birds' brains. Trials are underway to test whether the LEB triggers a significant 'escape' response from marine seabirds attending gillnet fisheries.
References