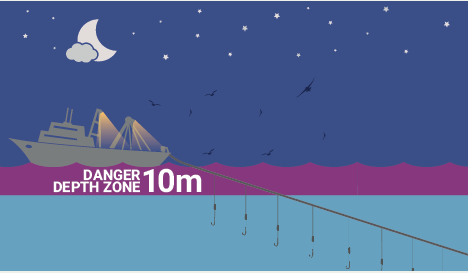 Night or day setting refers to the times of day when longliners** set, soak and haul their lines. These variables are inherently linked to the duration of the soak (the period that the longline is in the water). Timing depends principally on the target species, but also varies among fleets and regions. For example, around the Hawaiian archipelago, longlining for tuna occurs during the day at 150 to 400 m of depth, generally to the south of Hawaii, while longlining for swordfish occurs at night in areas north of Hawaii less than 100 m in depth [11]. In contrast, Taiwanese, Chinese and Australian longliners have used shallow setting at night in some areas to target large bigeye tuna [3]. Other variables may also come into play, such as weather and fishing success (boats will keep fishing if the catch is good). Some Regional Fisheries Management Organisations regulate the time of set, soak and haul (refer to the BMIS Regulations database).

The effects of time of set, soak and haul on bycatch levels become more complicated when set, soak and haul fall in both day and night, that is, including either dawn or dusk.
Night setting is a proven bycatch reduction technique for many seabird assemblages, when used in conjunction with other mitigation techniques (line-weighting and streamer/ bird-scaring lines). However, for marine turtles and sharks and rays, it is unclear how manipulating time of set, soak or haul could reduce bycatch. A review (2012) of marine mammal bycatch reduction techniques found only one study that had looked at night setting; it was unsuccessful [10].
**Gillnets -There is no evidence for using night setting as a means to reduce bycatch of seabirds, sea turtles, sharks and rays or marine mammals in gillnets. See Martin & Crawford (2015) for a discussion of the reasons for this from a sensory ecology perspective. Regarding the limited US west coast drift gillnet swordfish fishery, Sepulveda et al (2018) point to potential for combining deep-setting with daytime setting to reduce leatherback sea turtle entanglement.
Seabirds
This description is transcribed from the Night-setting Factsheet (May 2019) published (in English, Bahasa Indonesian, Japanese, Portuguese, Simplified & Traditional Chinese) by Birdlife International and ACAP for Pelagic Longline Fisheries.

What is it and how does it work?

Night-setting is particularly effective on moonless nights. The effectiveness of night-setting is reduced during bright moonlight and when using powerful deck lights. ACAP recommends that for night-setting to be effective, line setting should not commence until after nautical dusk and should be completed before nautical dawn, when the sun is still below the horizon. The exact times of nautical dusk and dawn are set out in the Nautical Almanac tables for the relevant latitude, local time and date. It is important that the entire set is completed at night. Many seabirds are active at dusk and dawn, and research has shown that sets that occur largely at night but continue into twilight and daylight hours are often associated with high levels of bycatch. Deck lighting should be kept at the minimum level appropriate for crew safety and directed inboard so the line is not illuminated as it leaves the vessel.

Night-setting is only truly effective on dark nights. In the highest latitudes during the summer months, the time between nautical dusk and dawn is limited. The time of setting may have unfavourable consequences for the catch rates of target species, or other taxa caught as bycatch.

Combination with other measures

Due to variations in the moon-phase, and the ability of some seabird species^ to forage at night, night-setting should be combined with line-weighting and bird-scaring lines.

Marine Turtles
The effect of time of set, soak or haul on marine turtle interactions with longlines has not been well studied. However, in their meta-analysis, Swimmer et al (2020) find that limiting retrieval of longline gear during daylight hours has been demonstrated to reduce sea turtle bycatch. Their conclusions about night/ day setting and soak duration are as follows:
Deploying gear before sunrise to reduce daylight hook soak duration may reduce sea turtle bycatch in longline fisheries (FAO 2009). In the western North Pacific, a study that compared by catch rates on hooks retrieved after sunrise with those retrieved before sunrise indicated that shortening daylight soak time would reduce bycatch of loggerhead sea turtles (Yokota et al. 2006a). Similarly, in the western North Atlantic, loggerhead turtle by - catch rates increased significantly as daylight hook soak time increased (Watson et al. 2003, 2005). These studies suggest that modifying time of day and soak duration during daylight could be explored as options for reducing sea turtle bycatch in longline fisheries.
In an earlier analysis, Clarke et al (2014) discuss reasons for the lack of research on time of set or haul, and soak duration:
"A number of older and often unpublished studies explored the effects of soak duration and time of hauling on sea turtle interaction rates. However, owing to a lack of definitive results, as well as perhaps the negative ramifications for target species, these operational modifications have not been subject to further research or regulatory implementation. For example, Gilman et al. (2006) review two studies, one that found higher interaction rates at night (but was confounded with shallow setting) and another that found an effect of total (not daylight) soak time on loggerheads only. While there may be further potential for mitigation through manipulation of soak duration and time of hauling (Gilman, 2011), issues of experiment design and inter- and intra-specific differences have led to conflicting results thus far and no clear research agenda."
Sharks
The biology and behaviour of elasmobranch species vary greatly and affect their chances of interacting with longline fishing gear. Both hook deployment depth and timing of the set and the haul (day versus night) have been found to affect 'catch per unit effort' (CPUE), perhaps due to different temperature preferences by each species [8]. For example, catch rates of bigeye thresher Alopias superciliosus in the Marshall Islands tuna longline fishery were highest on shallow night sets and deep day sets, which is consistent with this species’ movement pattern of swimming closer to the surface at night than during the day [5].
Research considering elasmobranchs and time of set, soak or haul has been limited and not led to management recommendations. As time of set, soak or haul and soak duration have been studied together, refer to 'Soak duration' for more detail.
Marine Mammals
A review (2012) of marine mammal bycatch reduction techniques found only one study that had looked at night setting; it was unsuccessful [10]. Werner et al (2015) [17] considered the potential of manipulating the time of day at which gear was set, i.e., setting when marine mammals are less active. They found that this is infeasible for some fisheries if the target species and marine mammals are both actively feeding at the same time.
Effect on Other Bycatch Species

The time of setting may have unfavourable consequences for the catch rates of target species, or other taxa caught as bycatch.

Ease of Deployment and Safety
Seabirds
Night-setting can raise concerns over crew safety. This can be overcome by ensuring adequate deck lighting is in place. Lighting should be directed inboard so the line is not illuminated as it leaves the vessel.
Cost Information

Does not require gear modification. Costs may accrue if time of setting causes a reduction in target species catch.