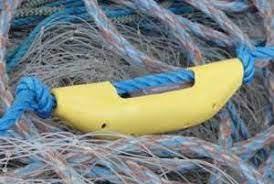 The following is an extract from Section 3.2 of FAO's (2021) Fishing operations. Guidelines to prevent and reduce bycatch of marine mammals in capture fisheries.

Pingers are a type of acoustic alarm. They tend to be relatively small, cylindrical units roughly the size of a soda can. They produce sound at different frequencies, although generally in the 3–70 kHz range, and lower than 180 dB (re 1 pPa @ 1 m). Some devices operate at random frequencies, such as the Dolphin Deterrence Devices produced by STM Products, which has a range of 5–500 kHz. Pingers are most commonly used to avoid the bycatch of small cetaceans in gillnets, harbour porpoise in particular.

While evidence shows that acoustic deterrents do not necessarily elicit a behavioural response that reduces bycatch for every marine mammal species, in controlled experiments comparing nets with and without pingers, and multi-year monitoring of bycatch levels, pingers have been shown to be effective in reducing bycatch or causing area avoidance for at least the following 7 species (although possibly as many as 12):

Some species, such as bottlenose dolphin (Tursiops truncatus), are attracted to the sound of pingers, presumably because they associate the sound with easy-to-catch fish caught in gillnets (Cox et al., 2004; Leeney et al., 2007). As such, there is no indication that pingers deter bottlenose dolphins from entering trawl nets (Allen et al., 2014). The interactions of both California (Zalophus californianus) and South American (Otaria flavescens) sea lions with gillnets appear to increase when acoustic deterrents are used; this has been termed the “dinner bell effect” (Barlow and Cameron, 2003; Bordino et al., 2002; Carretta and Barlow, 2011). Increasing the frequency to make pingers less audible to pinnipeds may eliminate this undesirable outcome. A trial in Argentina using a pinger with a higher frequency of 70 kHz, instead of 10 kHz, showed a similar reduction in franciscana dolphin bycatch without increasing the attraction of sea lions (Bordino et al., 2004).

At certain frequencies, pingers may lead to increased depredation and bycatch through the "dinner bell effect". [1]

Based on anecdotal reports of injury when hauling solid objects, some models may also have safety issues, while some units can rupture when the battery becomes exposed to water after deployment in deep waters. [1]

The costs of purchasing pingers and maintaining them can be a significant barrier to their use. Gillnets require several pingers along a net string at varying intervals, meaning that fishers must acquire and maintain numerous units. [1]