Cetaceans are the principal marine mammals affected by tuna fisheries. They may be incidentally captured in purse seines and entangled or hooked on longlines (e.g., false killer whales in the Hawaii-based deep-set longline fishery). Entanglement is a significant problem in medium-scale, semi-industrial and artisanal tuna drift gillnet fisheries. In the tropical tuna purse-seine fishery, species such as baleen whales or dolphins (as well the whale shark Rhincodon typus), may serve as sighting cues by purse-seine fishers for the presence of tuna schools at the surface of the sea and/or may be caught accidentally when fishing for the targeted species [1].

Successful techniques to release cetaceans from purse seine nets have been employed for some time, e.g., the backdown procedure and Medina panel, and there have been advances in techniques for safe handling and release of megafauna from purse seines, longlines and gillnets [2,3,4]. Progress in the development of dynamic spatial fishery management strategies will help fishers to avoid interactions in the first place. For example, a recent study identified the principal environmental variables influencing the co-occurrence between baleen whales, whale sharks and tuna purse-seine fisheries [1]. Fishing area closures are utilised in the interim. 'Weak' circle hooks and strong branchlines are required in the Hawaii-based deep-set and shallow-set longline fisheries (see NOAA's Whale link below). They can reduce bycatch (but not depredation), though post-interaction mortality is unknown.

SeaLlifeBase is a source of biological and distribution data for marine mammal species. FAO's guide to the Marine Mammals of the World provides species identification and distribution information. Locate handy Species ID guides here. NOAA's 'Find a Species - Dolphins & Porpoises' and 'Whales' has information on protection status, biology and population status, distribution, threats, conservation measures and research. Cetacean mortality can be reduced by following techniques outlined in Guidelines for the safe and humane handling and release of bycaught small cetaceans from fishing gear. 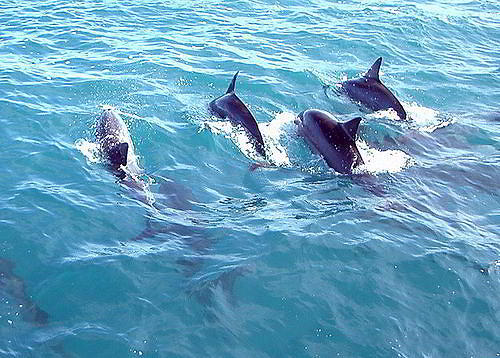