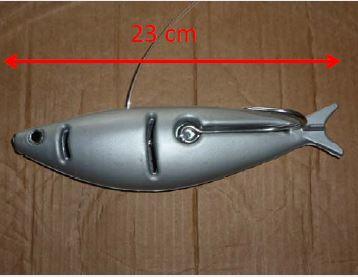 In: Bach, P., Hodent, T., Donadio, C., et al (2012) Bait innovation as a new challenge in pelagic longlining. In: Mitigating adverse ecological impacts of open ocean fisheries Symposium. MADE Symposium, Montpellier, France.
Artificial baits are an experimental technology in pelagic longline fisheries. Research in the field has been very limited, with mixed success. However, artificial baits may reduce some types of bycatch under certain conditions. An effective artificial bait would support the economic viability of the fishing operation while reducing bycatch of:
- unwanted finfish, including juveniles of the target species; and
- threatened species, including turtles, sharks, seabirds and marine mammals.
Industry are developing artificial baits for environmental and economic reasons [2], including their potential to:
- add value to tuna fisheries by reducing discards and turning waste into bait (by-product);
- reduce or stabilise the overall cost of bait through improved gear efficiency (e.g. by reducing bait lost during soak time);
- reduce pressure on bait fish resources (which may be better utilised in small scale pelagic longline fisheries or in direct human consumption); and
- reduce bycatch of some sharks, sea turtles and juveniles of target species.
There is some evidence that artificial baits can reduce bycatch in other fisheries. For example, in the Alaskan demersal longline fishery targeting sablefish (Anoplopoma fimbria) and Pacific halibut (Hippoglossus stenolepis), an artificial bait fished as well as or better than herring (control bait) for the target species, while reducing bycatch of squalid sharks, rays and some finfish [4,5]. The artificial bait performed better because of its superior 'fishing time' (the period over which it continued to attract fish) and its species-selectivity [4,5]. Another experiment demonstrated that artificial bait can be size-selective, and reduce the catch of under-sized Pacific cod (Gadus macrocephalus) [11]. The impact of bait size depends on species foraging biology and ecology; bigger bait won't necessarily catch bigger fish, though this may be true for many species [1,5,13].
Recent pelagic longline trials with artificial bait have reduced the bycatch of pelagic stingrays and dolphinfish [2]. The baits successfully caught target species (tuna and swordfish) but at lower catch rates than the control baits. Species-selectivity of the baits proved sub-optimal, but overall the trials were promising and more research is proposed (see below).
Various factors determine the species-selectivity of artificial bait, including visual (shape, size, colour), chemical (smell, taste), physical (texture, tenacity or 'fishing time') and other sensory traits [7,8,9,10]. These affect the attractiveness of bait but can also be manipulated to repel species [6]. For example, sharks can be repelled by shark necromones, and some are repelled by electropositive metals or magnets [9]. However, olfactory deterrents have not worked with marine turtles [14]. Design factors, such as bait weight and hook strength might also be manipulated to influence species-selectivity, for example to influence line weighting in fisheries where seabirds are problematic [3], or to incorporate weak hooks where marine mammal bycatch is an issue. These (speculative) examples illustrate how combinations of artificial baits and gear modifications might vary by fishery.
Prototype artificial baits have relied upon olfactory attractants alone or in combination with a visual attractant (bait shape), each with different physical properties. Natural and/or synthetic ingredients have been used to fabricate the baits. Examples of the different kinds of baits trialled include:
- extruded, sausage like products threaded onto a hook, relying on olfactory cues to attract fish [7];
- reinforced polyurethane foam impregnated with attractants (from shrimp bait) [11];
- plastic imitations of fish and squid (used as control lures), filled with attractants such as a piece of fish, or fish oil soaked sponge [12]; and
- bait shaped polyurethane moulds stuffed with an attractant [2].
Pulp mixtures have incorporated gelling and texturing agents (e.g., carrageenan, konjac), binders, attractants (e.g., shrimp odour) and dispersive agents (e.g., soap, salt, sand) [2,7,11].
Besides attracting and hooking the target species (and/or repelling bycatch species), there are other practical considerations shaping the development and adoption of artificial bait. Fabricated bait must be easy to handle [8], so that the efficiency of fishing operations is maintained or enhanced. It should also be safe to use (for fishers and the marine environment), cost-effective and widely available.
The most recent experimentation with artificial baits utilised polyurethane mouldings stuffed with a fish pulp mixture [2]. This research is expected to continue with the following objectives:
- identifying environmentally friendly material for the mould;
- evaluating mould design with regard to shark cues (e.g., incorporation of electropositive metals in the mould, the colour of the mould);
- evaluating mould design with regard to sink rate to avoid seabird bycatch;
- examining the fish pulp mixture (e.g., considering the inclusion of deterrents such as shark necromones); and
- hook design (diving speed, hook and barb shapes).
The behavioural responses of sharks to the new artificial baits might be tested in large sea net cages.
In summary, although they have the potential to both reduce bycatch and bring other efficiencies to the fishery (e.g. enhanced selectivity, waste reduction, etc.), much work remains to be done before artificial baits are a viable alternative to natural baits.

A review which is very useful to read in conjunction with the above description (see link at end of References): Lokkeborg, S., Siikavuopio, S.I., Humborstad, O.-B., Utne-Palm, A.C. and Ferter, K. 2014. Towards more efficient longline fisheries: fish feeding behaviour, bait characteristics and development of alternative baits. Reviews in Fish Biology and Fisheries 24: 985-1003.