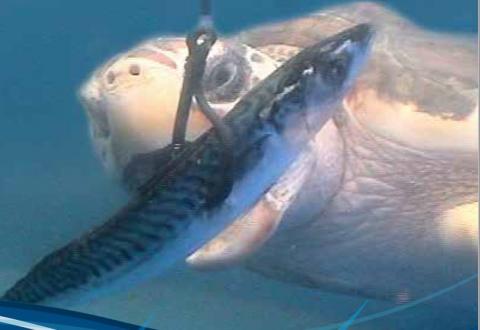 NOAA Southeast Fisheries Science Centre (SEFSC)
Sea Turtles
Using fish bait (such as mackerel and mullet) instead of squid bait has been shown to reduce sea turtle bycatch [14]. Research into bait effects has considered:
- how different combinations of hook type and bait affect sea turtle catch rates;
- whether bait or hook type has more influence on catch rates;
- whether using fish bait is equally successful in reducing catch rates of different sea turtle species;
- how sea turtles are attracted to and eat different baits and how this impacts catch rates;
- the effect on catch rates of using different methods of threading bait onto hooks;
- the economic impacts of changing to fish bait; and
- the effects of fish bait on catch rates of other vulnerable species.
A number of studies have shown that substituting fish bait for squid bait will reduce the likelihood of interactions with sea turtles. For example, studies of the Portuguese fleet in the equatorial Atlantic found that when mackerel bait was used instead of squid, the probability of interactions with olive ridley turtles declined by 56 percent [16 in 1]. In the Pacific, interaction rates for loggerhead turtles were 75 percent less when using mackerel bait than when using squid bait [20 in 1].
Bait effects have generally been investigated in combination with hook effects. A few studies have shown that the bait effect is stronger than the hook type effect. Recent trials in the south-west Atlantic showed that interactions with loggerhead and leatherback turtles could be significantly reduced by using mackerel bait instead of squid bait, and to a lesser extent by employing circle hooks rather than J hooks [17].
The relative merit of bait or hook type in reducing turtle bycatch is likely to be fishery-dependent (e.g. the species and life stage of turtle involved, hook size/shape/setting depth etc.). This is an area of much current research, with a particular focus on hook effects. However, across different oceanic areas, changing bait type from squid to mackerel (or other fish) and/or changing the traditional J to circle hooks, have been shown to be effective measures to reduce sea turtle bycatch [as per 16]: in the North-west Atlantic [6,19]; in the North-west Pacific [20]; in the Equatorial Atlantic [11,16]; and South Atlantic [4,15].
The impact on catch rates of changing from squid to fish bait may vary between sea turtle species. For example, in a summary of several early studies in the Atlantic, bait type appeared to be more of a factor for leatherbacks, whereas loggerheads benefitted more from a change from J hooks to circle hooks [14 in 1].
A recent review of bycatch mitigation in longline fisheries [1] discussed reasons for lower bycatch rates with mackerel bait and found that previous studies in the Pacific hypothesized that: "…the rubbery texture of squid made it likely that turtles would attempt to swallow it whole thus swallowing the hook as well [10]". The review also found that "Further support for this theory is provided by laboratory studies which found that turtles are four times as likely to attempt to swallow hooks baited with squid than hooks baited with mackerel [18]. The evidence is mixed however, since Watson et al. (2005) found no difference in anatomical hooking location between bait types, and Santos et al. (2012) found to the contrary that the probability of deep hooking increased when mackerel bait was used. Laboratory research also suggests that sea turtles may prefer squid to finfish due to natural chemical attractants present in squid [13]."
Bait placement on hooks may also be relevant to sea turtle bycatch mitigation, as explained in the review [1]: "A laboratory study compared turtles' attempts to swallow 'single-baited' (hooked once) and 'threaded' (hooked twice) squid and sardines and found that, regardless of species, threaded baits were 2.5 times more likely to be swallowed - probably because they are more difficult to strip from the hook [18]. Fishers in the United States Atlantic are said to choose whether or not to thread bait based on the importance of bait retention versus the speed of hook baiting and other factors [18]".
The impact on other vulnerable bycatch species of changing bait type needs to be considered [16]. For example, in one study (in a shallow set swordfish fishery) it was observed that when changing from squid to mackerel, although sea turtle bycatch decreased, the catch rates of some large pelagic sharks, including blue sharks and the vulnerable bigeye thresher, increased significantly [2 in 16]. However, most studies have found that using fish bait (mackerel, mullet) rather than squid bait results in lower bycatch rates of pelagic sharks [7,8,9,12].
Fishers may resist substituting fish bait for squid bait if the change has economic consequences. In some cases, target species catches are reduced, while in other cases the reductions in target species catches are balanced by gains in other marketable species [16].
While the conclusion that replacing squid baits with fish baits will reduce sea turtle bycatch is broadly supported in the literature, application of the technique to individual fisheries needs to be carefully considered. Success will be fishery dependent, as with other mitigation techniques. Among the factors that need to be evaluated are, for example, whether shallow or deep set fishing gear is used, the species and life-stage of turtle involved, seasons and oceanic areas (affecting sea surface and water profile temperatures**), and other bycatch species potentially affected.
** Refer to mitigation technique descriptions for 'Deep / shallow setting' and 'Spatial temporal measures' for more information.
Sharks
Under Review.
References
Effect on Sharks