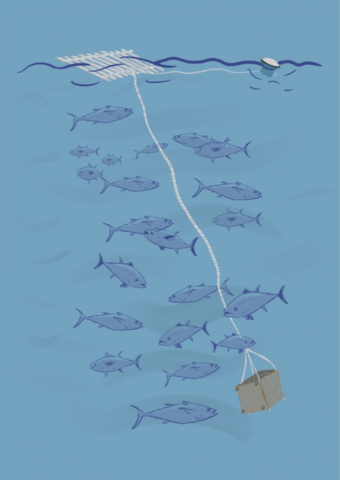 © Moreno et al 2020
Summary
Fish aggregating devices, or ‘FADs’, are floating objects, either natural or artificial, that attract and aggregate fish, including tuna schools. Silky and oceanic whitetip sharks are the main bycatch species in purse seine fisheries, incidentally caught when vessels fish on drifting FADs or entangled in the netting beneath FADs. Sea turtles are occasionally caught in seines and may be snared in the netting on, or under, FADs. Bycatch can be significantly reduced through effective FAD design (non-entangling, biodegradable) and management (e.g., limit FAD numbers & fishing seasons, shift a percentage of fishing effort to free schools, fish sharks from the net with handlines and release, target tuna schools greater than 10 tonnes, release sharks from deck using safe handling and release techniques).
Further information
Natural floating objects, such as logs, palm leaves or dead animals, have long been observed to attract fish. Fish Aggregating Devices (FADs), made of either natural or artificial materials, are deployed to exploit this phenomenon and help catch pelagic fish. The term 'FAD' encompasses both man-made, deployed FADs and naturally occurring flotsam [27].
FADS may be anchored or drifting. Anchored FADs are attached to the sea bottom using a weight such as a concrete block. A rope made of floating synthetics such as polypropylene attaches to the mooring and in turn attaches to a buoy. The buoy can float at the surface or lie below the surface to avoid detection and hazards such as weather and ship traffic. Fishers commonly equip drifting FADs with satellite (GPS) buoys so that they can be tracked remotely [12]. Some FADs include sonar capabilities as well, allowing the operator to remotely estimate the aggregation underneath. This improves fishing efficiency, helping fishers to decide where and when to fish to maximise catch during a trip [12].
It is important to distinguish between two categories of FADs, i.e., 'coastal' and 'oceanic' FADs or, alternatively, 'artisanal'  and 'industrial' FADs [3].
Coastal (Artisanal) FADs
Coastal FADs are usually anchored or tethered (tFADs) within range of small motor boats and canoes [1]. They are used to improve the food security of people who catch fish to feed their families or sell in small amounts at local markets, as well as for domestic fisheries development. They may also be used for recreational and game fishing [1]. The fishing methods used around tFADs, such as handline and trolling, select only species that the fishermen want and only a small proportion of the fish around the FAD are caught.

While some FAD tuna fisheries utilise anchored FADs, e.g., vessels in the western zones of the Philippines, Indonesia and Papua New Guinea, the majority fish on oceanic (industrial) FADs.

Lost or abandoned FADs can 'ghost fish', capturing other marine life, including marine mammals and seabirds. They may wash up on beaches or lodge on reefs, causing further ecosystem damage.